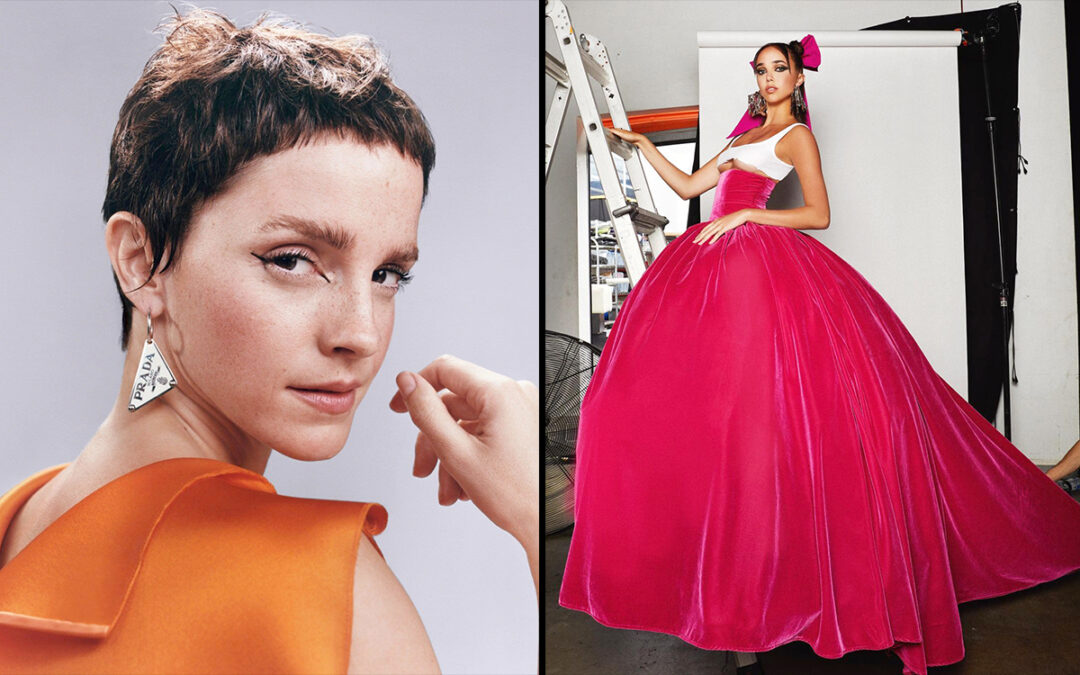 Get your hands on your monthly dose of fashion, entertainment, beauty & luxury. The September breeze blows fashion and glam toward us. Read on! The Toile de Jouy is a beloved timeless signature from Christian Dior and sees itself constantly reinvented. It has now found a place in the Dior Maison creations as a tribute to the couturier responsible for finding the eponymous brand. The French fashion house has recently introduced the beloved pattern to the home space with the launch of a new line for Dior Maison. It is available in various colours; each more gorgeous than the last. Essential serving pieces and decorative plates, everything is adorned with the Toile de Jouy Hydrangea motif, hand painted delicately. You can also get tea sets with the gorgeous motif.

THE NEW DIRECTOR FOR THE PRADA PARADOXE CAMPAIGN Prada’s new fragrance Prada Paradoxe has dropped and so has Emma Watson’s directorial debut. The Harry Potter actress directed the first major campaign for Prada scent that has been launched by L’Oreal. The actress claims it to be “serendipitous” that Prada approached her with the project as she had been wanting to direct something all along. According to Watson, the Prada woman is a “curious free-thinker” and she herself tries to be a free-thinker as much as possible. Her vision for the campaign was to come up with material that would interest her instead of boring her and that’s what she did. Talking about the scent, the Prada Paradoxe is for the woman who is multidimensional and never the same, always unflinchingly herself. The scent features dominant neroli and jasmine notes, with a white flower bouquet as well as an Ambrofix and Serenolide accord. Definitely worth checking out! The designer, Christian Cowan, has officially inserted himself into the four-season fashion calendar. The debut of his first resort collection certainly helped accomplish the feat. He also followed up the collection with a Spring 2023 runway show during the New York Fashion Week. Claiming that he wanted the collection to be an authentic reflection of who they are as a brand and where they’re headed. The collection features wild but still wearable pieces. Stretch lurex and crystal chainmail styles mark an appearance, and the whole collection is a strong continuation of the designer’s bold signature styles with covetable pieces.

GUCCI GETS WITH THE TIMES The Italian fashion giant makes history as the first major brand to start accepting crypto coin as payment. As the brand starts to accept payments in the form of the Bored Ape Yacht Club-affiliated ApeCoin, the move could actually accord the ApeCoin project with some significant mainstream exposure. It also benefits the barely 5-monthold cryptocurrency as it will provide it with some much-needed further utility. But it remains to be seen just how successful Gucci’s move is going to be as all major crypto coins have been bleeding rather heavily lately. But for now, Gucci is going to accept ApeCoin in US stores and is also planning to expand that reach across North America. The luxury resale platform is here with its latest sustainable drop that stands perfectly in the values of its founding. The collection is exclusively available at the website and their flagship store in New York’s SoHo. A preeminent marketplace for high-end consignment, the brand is doing great pushing forward the sustainability conversation in fashion. Its ReCollection program takes discarded pieces and transforms them into one-of-a-kind looks, also making a compelling case in favour of the circular economy. The collection has about 90 pieces to shop from and you’re helping save clothes from landfills at the same time! Win-win, right? Giving another nod to sustainability, we have Tom Ford, whose personal evolution towards living a more sustainable lifestyle has started to influence his designs. The designer himself has reduced his plastic usage as well as switched to a vegan diet. However, this is not the end of his sustainability journey – the designer also has a line of watches made from ocean plastic to his name. Adding to this line of watches, Tom Ford has started to reinvigorate this collection of ocean plastic watches with the introduction of the N.004 design. The new watches are minimalist, casual, and simple and are available in two colours – black and white. The watches have a braid strap that is made from 100% ocean plastic and can also be interchanged should you feel compelled to mix things up.