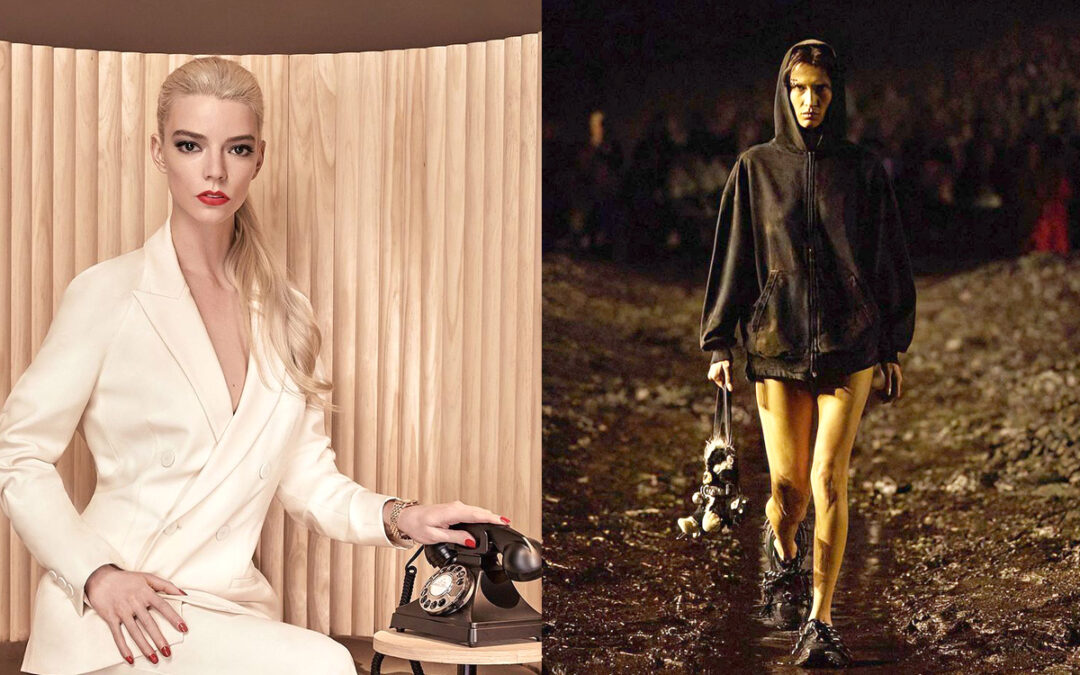 Get your hands on your monthly dose of fashion, entertainment, beauty & luxury. October is the month for lovers of all things spooky. If you’re also excited, read on!

JAEGER-LECOULTURE ROPES IN ANYA TAYLOR JOY AS THEIR BRAND AMBASSADOR Gushing about the actress, Jaeger-LeCoulture announced Anya Taylor Joy as their new ambassador. A living embodiment of modern femininity and one of the most exciting talents of her generation, the actress has the world absolutely enthralled with her on-screen talent. Welcoming her to the family, the brand released a short video titled “A Call of the Heart” that nods at the origins of the brand’s name. It is a homage to the phone call between Jacques-David LeCoulture and Edmond Jaeger that sealed the deal for the double-barrelled partnership and gave the Swiss watchmaker its unique name. The actress is seen appearing on the screen as a phone rings, and she answers it with a cryptic “Now, I’m ready now.” The gorgeous pink gold Reverso Duetto Small model is seen adorning her wrist and completing her stunning look. This is just another notch in her ambassadorship-adorned cap and we’re excited to see what this leads to! Vivienne Westwood has a lot in common with the British royals and one aspect of that is her commitment to planet activism. Although the designer has been vocal about her respect and admiration for the late queen, her latest collection seems to share King Charles III’s environmental passions. The collection had been photographed and was ready to go, but in a move that clearly showed Westwood’s respect for the queen, the designer waited until the day after the queen’s funeral to release images as well as market the collection. Termed “Born to Rewild,” the collection is filled with tailoring, and tartan and is a nod to 18th-century fashion. Made from 90% lower-impact fabrics, it also contains a few no-waste designs as well. Some pieces drew from the British military history and were a clear nod to the queen and the country. The House of Nina Ricci has announced the appointment of Harris Reed as its new Creative Director, and his first collection is to be revealed in early 2023. The British American talent is the youngest designer to take the creative helm of the French fashion house and is the second to take the torch for gender-fluid fashion. Ricci described the designer as “bold, daring and explosive,” and expectations from his first collection are really high amongst everyone. He is expected to “bring up new perspectives on the archives and lifelong craftsmanship of the house.” Reed’s sophisticated, yet larger-than-life outfits have been seen on the likes of Emma Watson, Harry Styles, Lil Nas X and many more and the designer is expected to bring “magnified fluidity” to the brand and its collections. Well, we don’t know about you, but we’re extremely excited to read this next chapter from Nina Ricci! No stranger to collaborations, both Lady Gaga and LVMH-owned Champagne house Dom Pérignon have reunited once again. And the result of the collaboration is the Dom Pérignon Rosé Vintage 2008 Lady Gaga Limited Edition that is now available for purchase. The Champagne house launched this edition as another reiteration of the ongoing limited-edition series that it shares with Lady Gaga which started with a 2021 launch. The campaign for the same featured an ethereal soundtrack and strips of rose ribbon as well as a strong infusion of values of self-expression and a bold design. The collaboration was created by a juxtaposition of polarities and dualities. This end of year edition opens instantly with raspberries and is rapidly joined with notes of velvet. The greener nuances then follow and evoke angelica with their arrival. According to Dom Pérignon, the maturity of the grapes has surpassed all expectations, and that the Rosé boasts exceptional high-toned balance.

WALKING ON MUD IS THE NEW RAMP WALK The Paris Fashion Week has been making plenty of headlines this time for featuring some of the most bizarre, unique, and experimental shows. The latest one to join the line is Balenciaga’s spring/summer 2023 collection. No stranger to making headlines for bizarre reasons, Balenciaga featured models walking in wet mud instead of traditional ramps. Models can be seen walking on a ramp covered with mud cakes and a shallow stream of water. The show featured Ye and Bella Hadid as well. The collection was designed by Balenciaga’s creative director Demna Gvasalia. Balenciaga is known for coming up with bizarre concepts, but this one might just top them all! The pop superstar has become a global phenomenon and her versatility, impeccable fashion sense and fierce independence made her the perfect choice for YSL Beauty’s latest fragrance – Libre Le Parfum. The Libre Le Parfum is a sexy and sensual update to the brand’s original Eau de Parfum with its searing saffron, floral orange blossom and light lavender notes that last all day. The singer gushed about getting to film such campaigns and has stated that she has a lot of emotional experiences while filming such campaigns. Talking about the fragrance, it is an intense and long-lasting floral perfume for women, and comes in an iconic couture Libre bottle that is engineered in a way that it looks like a piece of couture jewellery that is tinged in gold and is holding the amber coloured flowers of fire. Tattoo preservation’s first rule is the preservation of skin; and given the amount of tattoos Travis Barker has, we trust he knows what he’s on about. There has been a lot of hype around CBD skincare and this is what the musician has come up with – an edited skincare collection. The brand’s proprietary ingredient is CBD and resulted from the musician wanting to find a solution for recovery individuals highly active in their lives. The musician honed in on the CBD strains that worked best for him and then turned it into a skincare line. The first drop has launched 5 products: a 2-in-1 Cleanser and Mask, Eye Serum, a Face Serum, a Renewal Balm and a Daily Moisturizer. All products are a blend of CBD and CBG to “to help your skin do things like reduce redness while keeping it high quality, clean, and cruelty-free.” It looks like the musician’s elaborately tattooed head has taken a serious turn towards skincare, we’re certainly excited for the next drop.