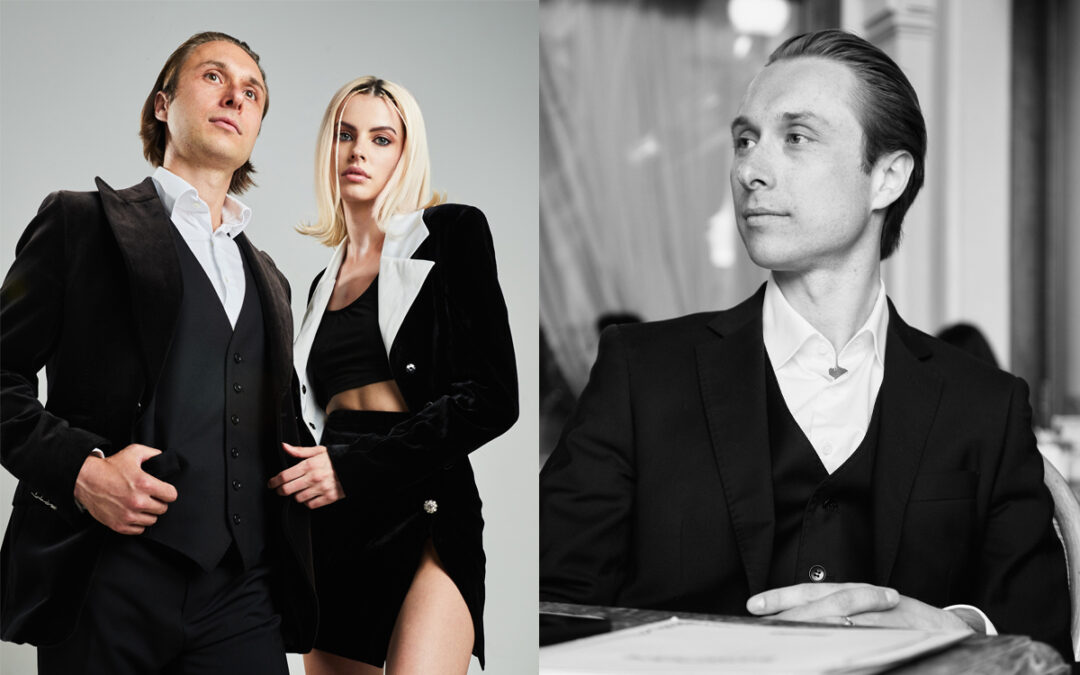 One Plus One is Always Fun And That’s Exactly What We Are Going To Give You This August With Baltazar Schaldenbrand and Anna Aleksashina Blessing Our Eyes!

Sometimes we feel like it’s the end – sometimes it seems like this is it. But fashion is a long way which has no need – which makes every way seem like a destination. The month of August is special – in terms of our cover star because this month we bless you with two; Baltazar Schaldenbrand and Anna Aleksashina. Baltazar, being an official diplomat of the Russian federation has so much to speak from his knowledge. And on the other hand, Anna is all about fashion, fitness, and psychology. What happens when you take opinions from more than one source? Well, you learn something new. Let’s take a look at how these love bird clarifies each and every detail to its core!

A warm welcome to you both. Baltazar, what inspired you in the first place that you chose to serve your nation?

This is a very interesting question! I will not say that from early childhood I was eager to devote my life to serving my country, it came much later in adulthood. At school and university, I was pretty much a bully and didn’t want to put myself in the tight confines of protocol, binding behaviour in all circumstances, especially when it comes to politics or diplomacy. But it is interesting that in my childhood I managed to combine good academic performance at school and university with my rebellion against going any system, even the school schedule. I was privately sent to the school Olympiads. As Winston Churchill said, whoever was not a revolutionary in his youth has no heart, and whoever did not become a conservative in adulthood has no brains. When I came to school on the first day and the teacher asked each of us the question of who we wanted to become when we grow up, I immediately answered: The President. For some reason, it was the position that inspired me and still inspires me the most. Perhaps my childhood consciousness perceived politics as something outstanding, showing the achievement of goals and the desire for success, or perhaps it was already in my heart from the beginning. For me, the law of rebirth from Buddhism and Hinduism is of great importance. Otherwise, how could such thoughts arise in a young mind?

Being a diplomat to one of the world’s biggest powers, where do you see Russia in terms of international relations in the upcoming five years, Baltazar?

Russia is certainly one of the great powers, on par with India, China and the United States. I am not a supporter of a unipolar or two-polar world. I saw the future of our planet earth as a whole planet, with a territorial division into self-government. In my opinion, the UN is a perfect example of a possible parliament for the whole planet. As the historical process shows, feudal countries united and became Empires. I think that the next step in this century is the United Federation of the Earth. If we talk about the near future of Russia for five years, I would certainly like to see the current President of Russia, Vladimir Putin, as our leader. In my opinion, he is a worthy and strong leader capable of making smart decisions. The role of Russia is certainly the role of a bridge between Asia and the Western world, it comes from its position on the global take and the mentality of the people living here. Many Russian philosophers of the last century spoke about this. For example, the largest mosque in Europe, part of Russia, was built in the capital of the Russian Empire, St. Petersburg. Russians like to study and accept other cultures, it’s in our minds. It is enough to recall our love for Indian culture, which was very popular in the Soviet Union.

You must have represented Russia on various international platforms. Which country inspires you the most, Baltazar?

At the age of 16, I went to study Zen Buddhism in Japan with my first mentor. We lived on the island of Okinawa in the Kozen-Ji ZenDo monastery. The philosophy and culture of this country impressed and changed me! I was interested in Japanese culture, attracted by the way of life and “The code of honour of the Japanese military aristocracy” became a reference book for me. He proclaims bushido as “The Way of death,” or “living as if you were already dead.” According to the code, a samurai is ready to die at any moment, in the name of preserving honour. The stories from “Hagakure” talk about military valour, military duty, conscience, responsibility, compassion, tolerance, and striving for self-improvement in the spiritual and professional spheres. At school and university, I was pretty much a bully and didn’t want to put myself in the tight confines of protocol, binding behaviour in all circumstances.

Anna, your sense of fashion is what made our eyes tingle. Name some brands that we can spot in your closet regularly. What’s your personal favourite?

Thank you for paying attention to my identity. In my opinion, fashion is a way of life and everyone has the right to decide how to live. But there are common understandings of style. It’s hard for me to single out one favourite because it’s not easy. There is always a story behind fashion. Depending on the place and time, fashion has always had an impact on a person’s consciousness. For example, the French fashion designer and founder of the Chanel fashion house had a significant impact on European fashion of the 20th century. Tom Ford’s brand, is elegant for men and revealing for women. Bottega Veneta is an Italian fashion brand for the design and production of clothing and luxury goods, founded in 1966, attracts my attention the most. If we talk about the style of a person in general, I would choose the James Bond Style for men and Meghan Markle’s style is for women.

Baltazar, you have recently been a part of the International Diplomatic Club. Tell us something about that.

The International Diplomatic Club is a meeting place for ambassadors of foreign states, political leaders, representatives of the Russian authorities, leaders of public diplomacy, and business and cultural figures. The purpose of the Club’s activities: assist in the implementation of the foreign policy concept of the Russian Federation, approved by President Putin V.V. According to chapter II, paragraph 9: “An integral component of modern international policy is the use of soft power tools to solve foreign policy tasks, primarily the capabilities of civil society, information and communication, humanitarian and other methods.” The mission of the Club is to join the international community and provide more informal dialogue with a focus on better external relations between representatives of foreign countries and state authorities with supporting local civil society in the field of public diplomacy. I hope that this club will take its place at the top of the political life of the world. If we talk about the near future of Russia for five years, I would certainly like to see the current President of Russia, Vladimir Putin, as our leader.

Your look gorgeous Anna, be it any outfit you choose to wear. What’s your secret to such a fit body?

The secret is very simple. I don’t go over the daily calorie allowance, I lead an active lifestyle and smile a lot.

Talking of the romantic side of Baltazar, where and how did you and Anna meet? What were the attributes that made you fall for her?

It was a romantic meeting; Anna had a photo shoot for Chanel in the centre of Moscow. She was surrounded by a dozen people: photographers, stylists, everyone was running around her and she was standing in the centre. I was passing by and our eyes met. And I realized that there is something in the eyes of this girl that I can’t live without. And I approached her throughout the whole crowd and asked for her phone number and date of birth, saying that I was interested in astrology and wanted to see her natal chart. So, we started chatting, and according to her, when she saw me, she wanted to get to know me better, because I looked very mysterious, in a black suit but with an attractive smile. I guess I’m still a good astrologer.

If you would have to choose a country to live in other than Russia, which one would it be and why Baltazar?

I would like to represent Russia in the USA; it is our main opponent in international relations. I was lucky enough to represent the interests of U.S. President Ronald Reagan’s adviser on Soviet affairs, Suzanne Massie in Russia when she was granted citizenship by the Russian President. She became my friend and teacher of diplomacy. I learned a lot from this amazing woman who stopped the Cold War. She told me that Reagan never turned his opponent into an enemy.

Baltazar, taking a break from the diplomatic questions, what do you do when you get some time off from work?

My hobby is old books, I like to read them and go shopping in search of interesting copies. I am interested in books especially based on Eastern philosophies of the last century. The Western world has learned a lot from the spiritual teachings of the ancient East. It’s hard for me to single out one favourite because it’s not easy. There is always a story behind fashion.

Anna, you are a psychologist too, what inspired you in the first place to go for this profession?

Psychology is the science of the human soul. First of all, I was inspired by a true love for people. Since childhood, I have always been interested in what this or that person is thinking at the moment. Whenever my friends got upset, I wanted to sincerely support them. I didn’t always know how to support a person who is very upset and what to say to this person. This was the reason to study this science about people. Then, when it became easy for me to find words, I realized that this is the golden key to people’s hearts. Knowledge about psychology opens many doors, especially to the human soul. What could be more beautiful than seeing the true face of a person? This knowledge also helps in everyday life and in choosing your Environment.

Congratulations to you and Baltazar for the soon-to-be-heard wedding bells. What are the qualities that made you believe – he’s the one for you, Anna?

There are perhaps three qualities that I will highlight. With a high level of intelligence, I singled him out first because I think that a man should have it. In the second place, I will put charisma. Maybe you will understand me, there are such charismatic men from whom you do not want to take your leave even for a minute. The third is the moral qualities of a person worthy of respect and pride. There are more than three advantages, but I promised to highlight only them.

Anna, how much do you think fashion has grown in the Russian Federation? What do you want to give to aspiring fashion enthusiasts?

We actively began to develop fashion in Russia and establish partnerships with friendly countries based on fashion. We recently had a major event, Fashion Week in Moscow, where every designer could speak out on public platforms. I want to emphasize that there are good fabrics in India. And that you should establish your worldwide brand and introduce your colour culture. Thereby making the whole world brighter.